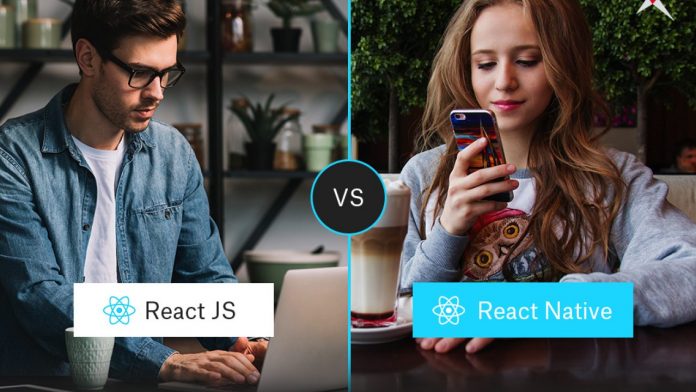 ReactJS was developed and also being used currently by Facebook. It was designed to create a dynamic and highly efficient User Interface for the end-user.

In 2011, the Facebook Team released the React JS library, which was used to bring together the speed of JavaScript rendering, thus leading to responsive and dynamic user input.

In 2015, two years after the open-source of ReactJS and massive popularity, Facebook released React Native.

Below are some salient pointers which explain the differences of working with both ReactJS and also React Native. It should give you a basic overview of what’s different among these two.

Often referred to as React, its a Javascript library used for building a hierarchy of User Interface Components. ReactJS provides both front end and server-side support.

Remember, ReactJS is only a V part of the MVC framework, or, a library meant for rendering views.

Advantages while working with React:

React’s virtual DOM is a lot faster and efficient than the conventional full refresh model. This is because the virtual DOM refreshes only parts of the page.

The exciting part is, the team at Facebook wasn’t aware that partially refreshing a page would prove faster. They were only looking for a way to reduce re-build time, and this just led to increased performance and faster programming.

To know more about this library, have a look at ReactJS Interview Questions.

React Native uses Native Modules and components to improve its performance and efficiency. Unlike Ionic, Cordova and other hybrid application frameworks that render code via WebView, React Native renders a part of the code component using native APIs.

React Native is packed with all the advantages of ReactJS and the UI/UX based functionalities of ReactJS still remain in React Native. One more important detail is that you do not have to develop the same application for iOS and Android separately as a unified code base in React Native allows your developers to reuse the common logic layer.

React Native comes with a component-based structure, thus allowing developers to build applications having a more agile and web-styled approach for development.

Knowing JavaScript gives you a significant advantage as React Native will be easy to pick-up, allowing most front-end web developers to become a mobile app developer. All you need is knowledge of JavaScript, platform APIs, some native UI elements, and any other platform-specific design patterns and you’re set.

There is no need to overwrite your old mobile application. All you have to do is add some React Native UI components into your existing app’s codebase, without having to rewrite the whole code.

Native application development usually means inefficiency, slower time to deployment, and less developer productivity due to a lot of time waste. React Native is basically all about bringing high speed, responsiveness, and agility of web app development along with efficient processing and best user experience to the hybrid space, to provide your users with a native app experience.

To know more about this Javascript Framework, have a look at React Native Interview Questions.

Here’s an overview of the differences between

React is a development framework for building applications using JS. React Native as an entire platform allows you to develop hybrid or cross-platform mobile apps, whereas ReactJS is a library used for developing highly efficient UI layers.

Here’s the basic difference between ReactJS and React Native:

It is a JavaScript framework having in-built libraries for developing highly interactive mobile apps.

The bottom line, React is the best possible solution for building dynamic, high performing, responsive UI for your web interfaces, while React Native is meant to give your mobile apps a genuinely natural feel.

The Teacher’s Aide you Shouldn’t be Without